The Death of Colosio 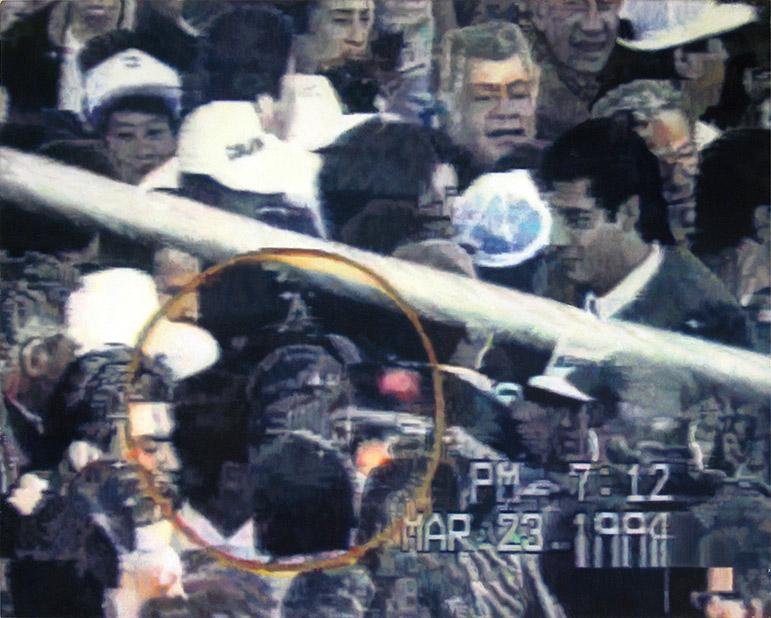 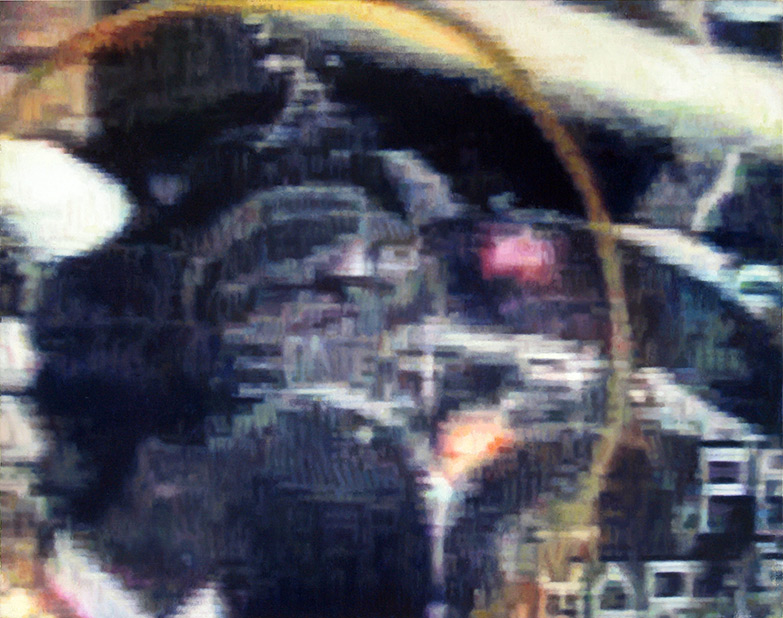 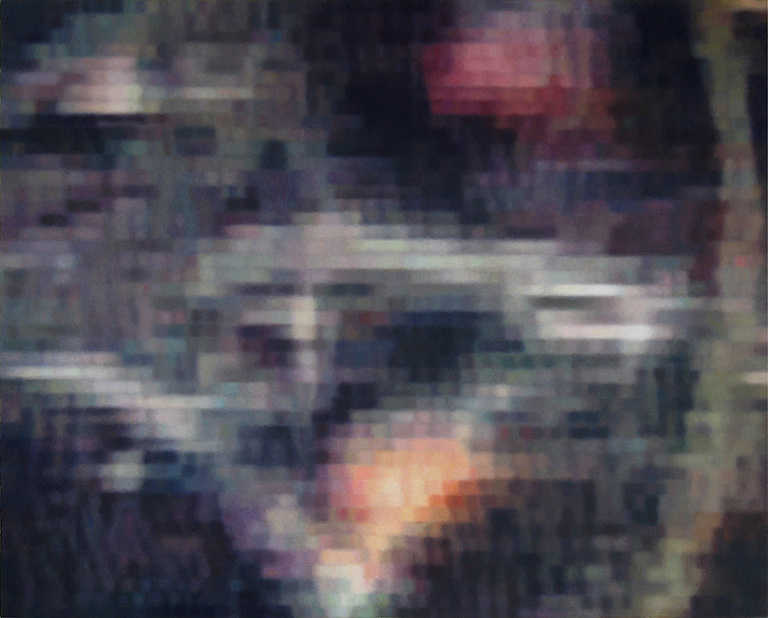 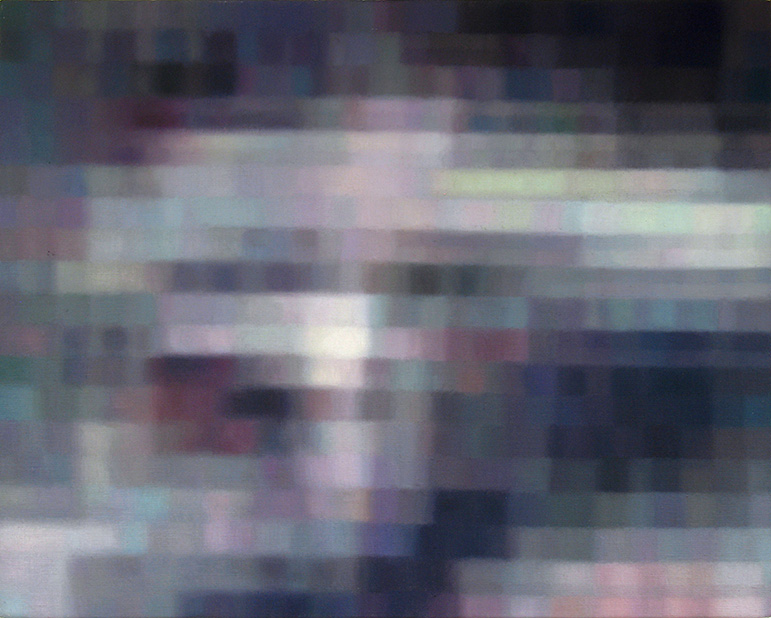 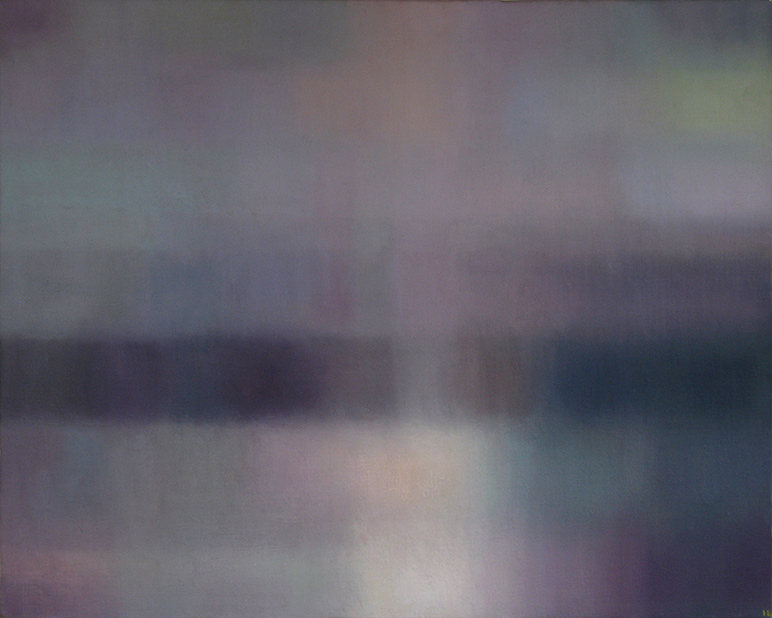 This series of paintings consists of five oils on linen where the artist pictorially reproduces five consecutive zoom-in steps into a video still; a process taking us from figuration to abstraction. The scene is a dramatic one: the instant the arm that killed Luis Donaldo Colosio (Mexico’s official presidential candidate for the 1994 elections) was fired; an assassination that shocked the nation.

That moment, captured on television, was endlessly repeated on the national and international news. Today, the live recording is the only testimony left of that event. Lieberman pauses the video at the precise moment the gun was fired and digitally zooms into the scene. The painter is looking for more information in that visual document. His urge reminds us of the character in Michelangelo Antonioni’s great film Blow-Up (1966); a fashion photographer who, after frenetically blowing-up a photograph he took while strolling in the park, discovers in a minute area of the film that a crime is taking place. In Blow-Up, what is not seen at first glance, but was registered in the photographic instant, reappears through the consecutive close-up.

On the contrary to the fantastic findings of Antonioni’s character, what happened that 23rd. of March cannot be seen (nor understood) better by getting closer; what is achieved in quite the opposite –an increasingly blurry picture. Getting closer to a video still does not necessarily give us more information about the event it depicts. The closer we get in order to see, the more confusing the scene becomes. The pixels explain a color composition, not reality. How much of reality does an image contain? Perhaps, since it is impossible to say, one can continue and continue to paint.

The Death of Colosio was presented on the day and hour of the eleventh anniversary of his death, at La Fundación Colosio, Mexico City. 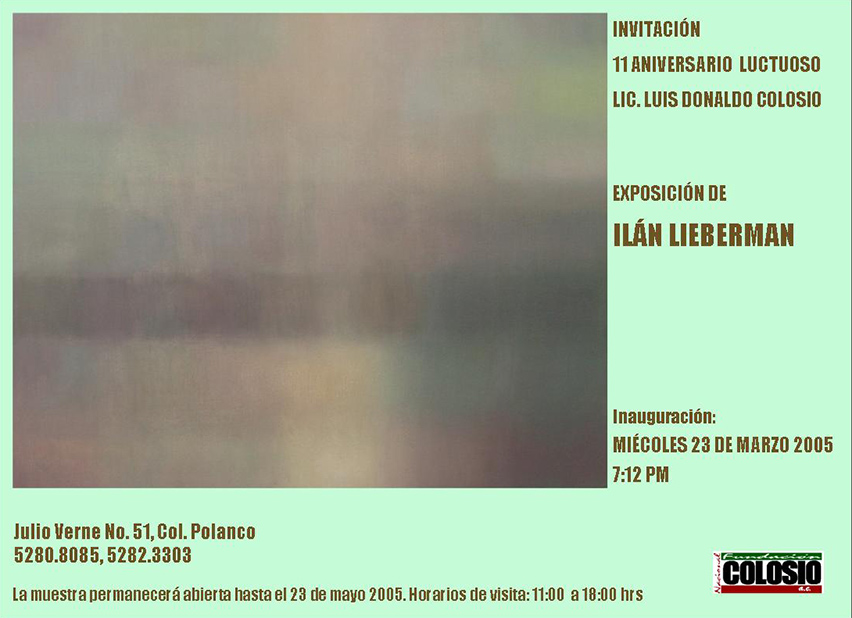 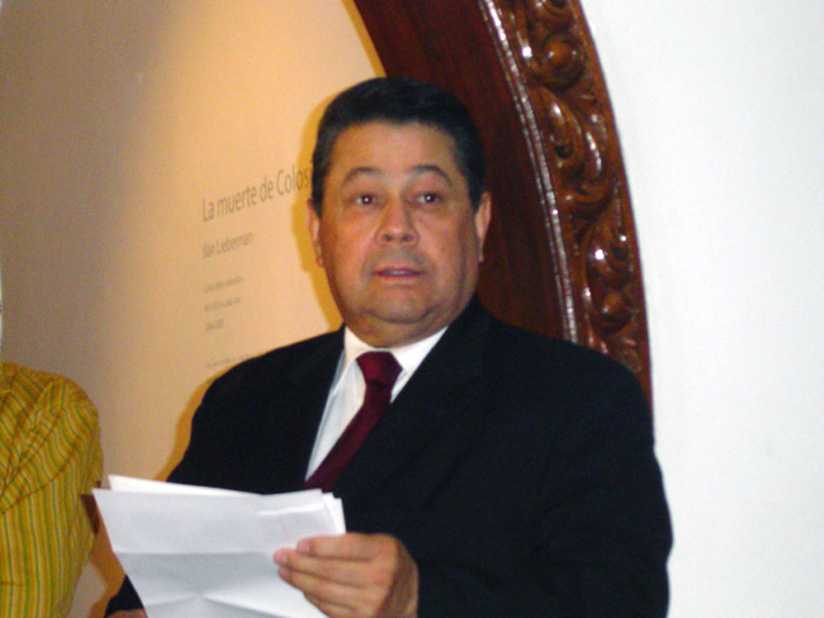 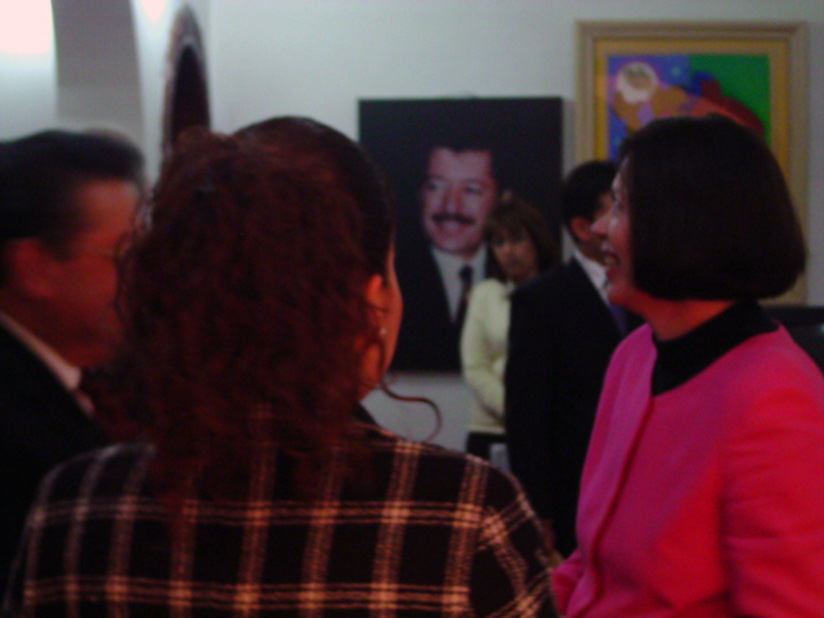 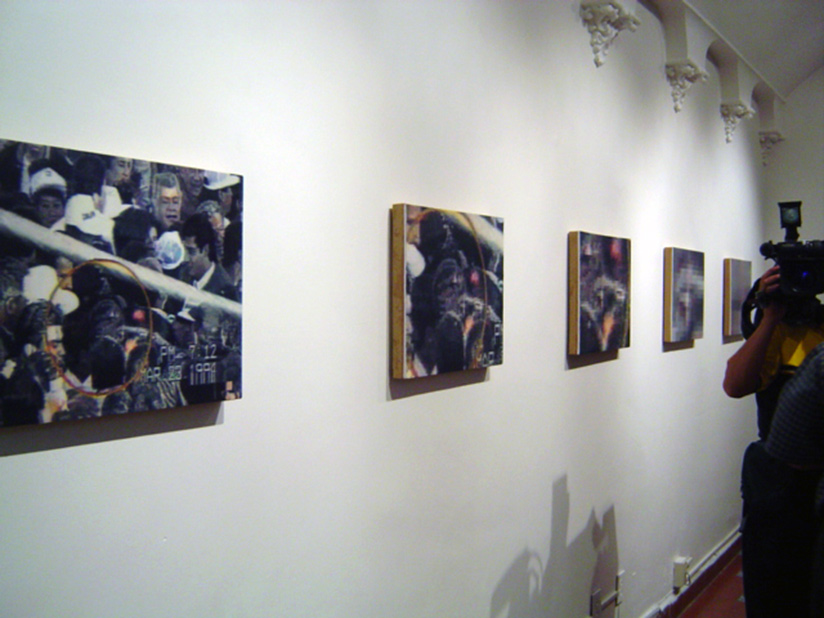 Speech delivered by Jorge Moreno Collado, Vice President of La Fundación Colosio A.C., at the opening of the exhibition The Death of Colosio by Ilán Lieberman. Mexico City, March 23rd 2005.

On behalf of Beatriz Paredes, President of La Fundación Colosio A.C. I give you the warmest welcome to this home, the residence of the intellectual and political legacy of Luis Donaldo Colosio, a leader and head of the Mexican PRI Institutional Revolutionary Party, promoter of our Party’s reform and of Mexican politics and government.The walls of this house not only divide their rooms; they also serve to unite and sustain the solid headquarters building of this evocative Foundation. Politics and art go together, because since the ancient Greeks, man learned that politics –according to Aristotle– is the science and art of government.Welcome to this house in Polanco neighborhood, where art and the science of government, our main interest, live happily together and today gratefully with pictorial art and the science of light, harmony and the color.
Painting not necessarily portrays reality, because it is often elusive, deceptive and multiple. As in these five paintings by Ilán Lieberman, Colosio’s death becomes abstract, or fades away, because reality is always an interpretation.
Painting is a reality in itself, describing and interpreting other realities. Every work of art, especially painting, expresses the singularity of the artist, of his or her intention, conscious purpose, symbolic language, intimacy, psychological identity, and unique personality.
But works of art, paintings, like magic carpets, escape from the author, often shy away from the subjective prison of the artist, they are objectified to become “the matter” or interest of others; by provoking visions and diverse emotions, encouraging unexpected reactions, communicating innovative concepts, ideas and images, different for every observer of the canvas, the painting, the mural, the visual expression, hiding within a different meaning.
The pictorial object and the painter have a close and intimate relationship, but each lays claim to his autonomy, independence, freedom. The painter seduces, and the picture induces, instigates, persuades. In the painter is the intimate self that appropriates light, harmony, or line and space; on the canvas, exposed to all, placed for public scrutiny, is the common self, the shared image, concurrent emotion that moves to laughter, anger, tears, sadness, longing, nostalgia, evocation, remembrance, or the commitment and movement of individuals and society.
With his painting, the artist expresses his view, transmits, introjects and shares; but others are not undaunted continents, dumbfounded empty bodies or spirits. We also want art to tell us what we’re expecting, what we can not equally express, but we all understand in the same way, with similar intensity; we crave in the art we see, what we would like to express in our own language: the language of culture, which allows us to be co-authors with the artist, because we give meaning to his or her creation.
Therefore, today is a memorable and special occasion: because on the walls of this room we show a series of paintings, and under this roof we receive and pay homage to its author. Because today, March 23, 2005, at 7 and 12 minutes, the exact time of his death, Luis Donaldo Colosio Murrieta is evoked; remembered, yearned for by the series of paintings entitled The Death of Colosio, a set of five oils the result of the skillful and sensitive, masterly and stark brush of Ilan Lieberman, a young artist with an already long career in academia and in artistic production dating back from his studies and technical and intellectual training between 1984 and 1992 and his solo exhibitions from 1989 to the present, and his group shows, staring in 1993 with Encontro dos pintores extrangeiros in Brasilia, and ending in La pintura se fuga, held at the Reclusorio Oriente prison facility of this city in 2004.
The use of paradox and metaphor in the paintings and in the titles of his shows may lead us to believe that Ilán Lieberman’s work has double meaning: not because of his craftiness, or his surprising interpretations, yes due to his bi-centrality: of art itself, with which, in this case, ” the artist pictorially reproduces five consecutive zoom-in steps into a video still”; and the centrality of character and the historical and appalling fact that arouses us all again and unites us in anger and sadness. In these five oil paintings, we find what the artist states, but also what we hear and see.
The work and its title reassure us in the certainty that the bullets and the murder are not enough to kill the ideas and projects. The baseness of the crime, is not powerful enough to destroy the greatness of a life of accomplishments abruptly truncated; the instantaneous and fatal shot is not able to stop the persistence of a work and a project like Colosio’s, who we still remember with admiration and dignified obedience.
I congratulate Ilán Lieberman for having motivated this gathering of friends and admirers of art. This exhibition will proudly remain in this house til May 23 and will be a source of satisfaction for those who dwell in it, display it to all visitors and promote in them the interest to discuss with the work and reflect on its message.